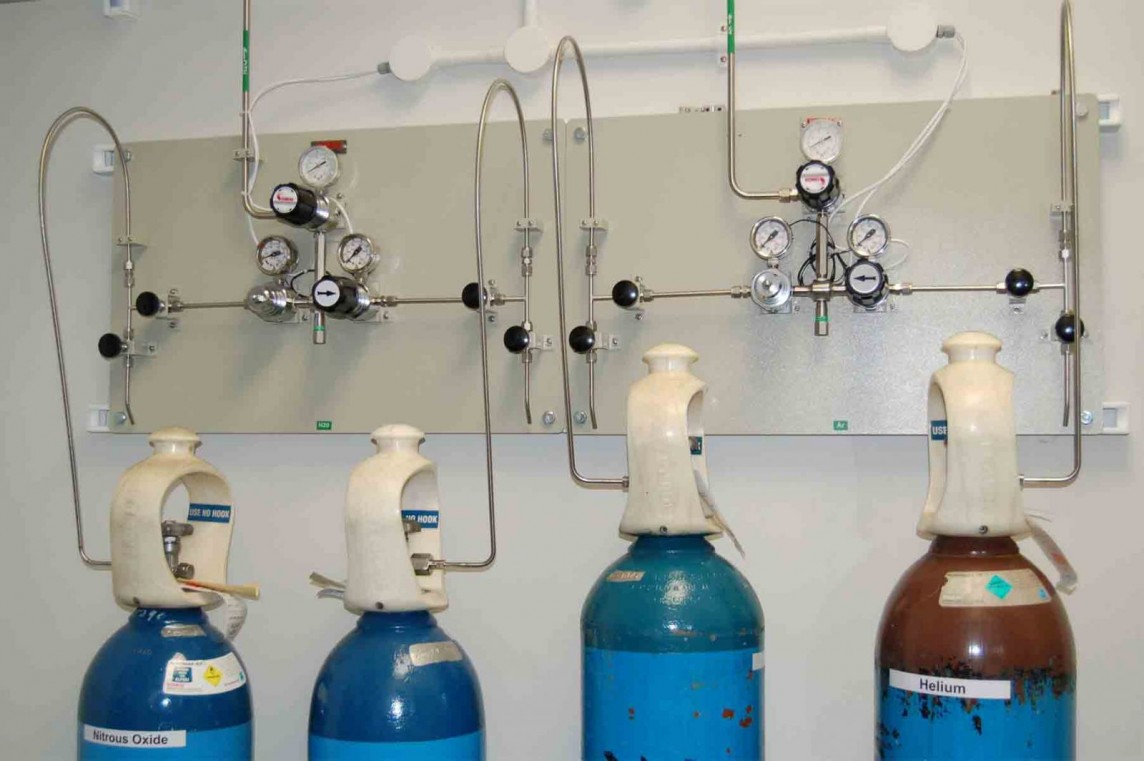 The helium cools the superconductor material at low temperature and cools the supermagnetic magnets at a low and near zero absolute temperature, so the electronic resistance of superconductor suddenly decreases to zero. Very low electronic resistance in superconductors enables them to produce a stronger magnetic field. For MRI equipment in the hospital, as thestrength of magnetic field increases, more details appear in the radiological image scan. Helium is used as a superconductor, since it has the lowest melting point and boiling point in the elements, the helium doesn’tbecome solid at atmospheric pressure and is chemically inert. In addition, helium is a superfluid at the temperature below 2.2 Kelvin. So far, the super-fluid feature has not been used in any industrial project. If the temperature less than 17 K is required, helium as a superconductor can not be replaced in cryogenic applications.

Helium gas is the second lightest element after hydrogen and its density is less than air. Therefore, helium was used as a lifting gas for balloons, meteorological balloons, airships and air balloons after the First World War.

Helium gas is the second lightest element after hydrogen and its density is less than air. Therefore, helium was used as a lifting gas for balloons, meteorological balloons, airships and air balloons after the First World War.

Although helium gas floating is less than hydrogen, helium is also preferred as a lifting gas, since helium is not flammable. The use of helium as a lift gas was the first application of helium after its discovery. Helium gas can be replaced with hydrogen or a combination of hydrogen and nitrogen

Welding
Helium gas is used as a protective gas in electronic arc welding and plasma arc welding, because it has the highest ionization potential between atoms. The protective atmosphere of the helium gas around the welding site prevents oxidation of metalsin the melting state. High helium ionization potential makes it possible for plasma arc welding to work with strange metals such as titanium, zirconium, magnesium and aluminum alloys used in construction, shipbuilding and aerospace. Helium, as a protective gas, can be replaced with argon or hydrogen, although it is not possible to replace helium with other gases for arc welding of certain materials, such as titanium, because helium is the only gas that is safe to use at high operating temperatures.

Applications within the atmosphere

Helium gas is used in pressure cleaning operations, where liquid hydrogen or other gases are replaced by helium or liquid helium or used other gases. Because helium is the only gas with the lowest boiling point than hydrogen, and helium is inert. Nitrogen isn’t used as a cleaning gas for liquid hydrogen systems, because nitrogen will become solid in these conditions. Helium is used as a cleaning gasin aerospace industry for organizations such as Arizona Space and NASA. For example, in the delta IV rocket, helium was used to preserve pressure in liquid oxygen fuel tanks. When liquid oxygen burns as a rocket fuel, helium is injected into the fuel tank to prevent its collapse. Helium, as a  cleaning gas, can be replaced with nitrogen, but it can not be replaced in liquid hydrogen systems.

Helium gas is used to detect leakage because it has the smallest molecular size and it is similar to a single atomic molecule. Thus, helium can easily pass through the smallest leakage places. During the leak detection stage, the object is filled with helium and in this case, a helium mass spectrometer is used to detect the leakage place. Helium is used to detectleakage inrockets, fuel tanks, heat exchangers, gas lines, various electronic equipment, television tubes and other manufacturing components. Helium was first used to detect leakage in the Manhattan Project to find leakage in uranium enrichment plants. Helium can be replaced by hydrogen or nitrogen in leakage detection.

Helium is used as a coolant during the fiber optic cable production process, because it has very high thermal conductivity and specific heat. The low temperature and inaction of liquid helium has made it an ideal choice for quickcooling of thesiliconfibers in the cooling tube, which were placed in the form of glass fibers from the glass ingot to the operating location. Helium as a cooling medium can be replaced by hydrogen or nitrogen.

Helium is used for scuba diving in deep water at depth of more than 30 meters, because it has very little solubility in water and blood. Helium /oxygen breathing mixture like Hiller, Tremix, and Heliux are used instead of oxygen/nitrogen breathing mixtures to prevent nocturnal sleep or nitrogen creation in the blood. In addition, helium doesn’t lead to the erosion of equipment and it is non-toxic. The possibility of substitutinghydrogen for helium in scuba diving gas in deep-water has been studied.

Helium is used as a powder carrier gas for thermal and cold spray, due to high sound speed and its physical inactivity. Thermal spray and cold spray are commonly known as metal coating spray, which is a surface coating process where a wide range of metals and ceramics can be sprayed on the surface of another material at high speeds to form a metal coating on it. In addition, the high speed of the helium sound makes your sound slightly chirping after helium inhalation.i Helium as a gas carrying powdercan be replaced by nitrogen.

Helium is used as an applied gas in lasers and in lighting. Helium-intensifying gas is used in gas lasers, such as helium-neon lasers, CO2 lasers, and metal vapor lasers, such as helium-cadmium metal vapor lasers. Helium is used in laser to create excitement. Different lasers with helium applied gas are used for various applications such as scientific research, interference, holography, spectroscopy, barcode scanning, alignment, laser eye surgery, optical display, printing, typography, applied programs, welding and cutting. Most helium-neon lasers have now been replaced by cheaper diode lasers. In addition, helium is used as gas in gas discharge lamps. The helium emits white to orange. Helium work gas in gas discharge lamps. Helium emits white to orange colors. Gas discharge lamps are used by artists for special lighting purposes. Helium gas as a work gas or resonator is n’t replaceable in some types of lasers.

Telescope
Helium gas is used in solar telescopes. Helium reduces the deviation effects caused by heat between the lenses in some telescopes because,it has an extremely low refractive index and high thermal conductivity. Helium can be replaced by vacuum telescopes.

Helium gas is used in some hard drives. Hard drives are filled with helium to acheive high data storage capabilities. Helium has a seventh air density, which reduces mechanical force in air stretching and air cuts. Besides, it allows the rotating discs to get closer to each other. In addition, due to the presence of helium gas, rotating discs have higher efficient energy because they require less engine power and less cooling process.